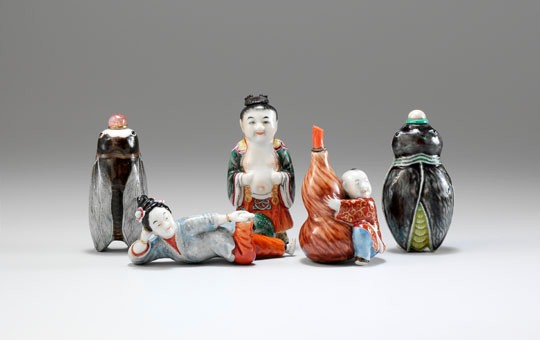 Chinese snuff bottles, and the powdered tobacco which they contained, were at the heart of a fashion which had no equivalent in China's long history. Because of the extraordinary variety of styles, techniques and materials found in these small objects, and the exquisite craftsmanship which was lavished upon them, these miniature masterpieces became one of the most important representations of the applied arts during the Qing Dynasty.

Tobacco, introduced into China from Europe towards the end of the 16th Century, was at first smoked in pipes. Its use as snuff began only after the establishment of the Qing Dynasty in 1644. At that time, smoking of tobacco was forbidden but, paradoxically, the use of snuff was acceptable because it was valued for its medicinal qualities. Considered as an effective remedy for colds, headaches, stomach disorders and many other illnesses, the powdered tobacco was dispensed in a bottle, as were most other medicines in China, rather than in boxes as was the European custom.

At first confined to the elite of the new dynastic house, the popularity of snuff and the snuff bottle was firmly established in and around the court at Beijing by the end of the 17th Century. The custom appears to have remained centred there for most of the 18th century, and the use of snuff became a social ritual of the upper classes. The containers upon which much art, taste and money had been expended became the subject of active acquisition. Snuff bottles also became the new currency for the purchase of favours, positions and advancement in government.

Spreading slowly and gradually to the rest of the country, snuff-taking and the collecting of snuff bottles had become a nationwide habit among all social classes by the end of the 18th century. It was common courtesy to offer friends a pinch of snuff upon meeting them in the street or at home, and great status accrued to the owner of the most unusual or finest bottle.

Made in every material known to the Chinese -- glass, porcelain, jade and other hardstones, ivory, coral, lacquer, amber, wood, etc.-- the snuff bottle was then produced in enormous quantities and of varying quality to supply the increased demand. Although the high point in the manufacture of most types of bottles was the 18th century, a great many fine bottles continued to be made throughout the 19th century.

The popularity of snuff and the snuff bottle rose and fell with the fate of the Qing dynasty. After the revolution and the establishment of the Republic in 1912, the fashion of snuffing died away. Today, however, there is a rapidly growing number of collectors throughout the world who are fascinated by these small, exquisite objects and attracted by their aesthetic and tactile qualities.